The “St. Paddy’s Day Great Potato Race” on March 17th was a winner no matter how you experienced the most memorable event.  It was one of camaraderie, creativity, competition and the consumption of good food and drink. Hosts, Debby and John Hertel, were exemplary in the arrangements—Debby with creative and festive decorations and John as the chief welcomer, assistant in all things and congenial host.  Co-host Bob McLaughlin (husband of Sarah, cub reporter and new-bee to the event), brought in the tracks and set them up with able helper, Host John. We were all generously and graciously assisted by Laura Murdock.

As a first timer, I passed up picking out “the fastest” potato, wheels with small nails, and a carving knife as I entered Paisan’s where owner Mike Angelis guided the prep and presentation of a delicious traditional Irish, St. Paddy’s Day meal.  I left the potato carving to the other 40 budding champs, some of whom arrived with special tools (Halloween carving set), pictures (of a Porsche, of course), previous experience (master carvers) and the determination of a Grand Prix entrant.  All, with fervor, tackled the delicate and detailed job of carving the potato for speed and balance, with special enduring quality (hopefully for at least  3-4 runs) to placement of the wheels!

At the call for dinner, the carvers cleaned up the potato debris,

set their prize “ready for the track” car-like potato to the side as all enjoyed a delicious dinner. With the conclusion of dinner, as dessert was served, several mid-March birthdays of club members were celebrated, among them Millie Smith and Carol Lytle (pictured).  So aside from what happened to Julius in the distant past … the Ides of March are not so dreadful after all.

With dinner finished, our amateur and professional potato racers were called to the track and we were off to a raucous, fun, competition of single-elimination potato racing.  Rich O’Larey served as the head race official assisted by finish line referees Barry Rosenthal and John Zeising.  As expected, competition was fierce with many “spud-tastrophes” and visibly disappointed potato racer designers. Some potatoes traveled only a short distance before losing their wheels or ground to a halt against a guard rail or simply ran off the track. Some potatoes were clearly determined to crash into the competing potato rather than completing the course. After several more run-offs and eliminations, with abundant robust (noisy) cheerleading, it was down to two racers.  After the final run, the winner was obvious as his potato racer cleared the end of the track and kept on going!   It was indeed a winner.  Its designer and master carver for first place was none other than . . . Drum roll . . . 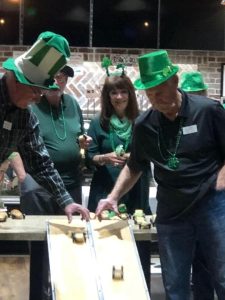 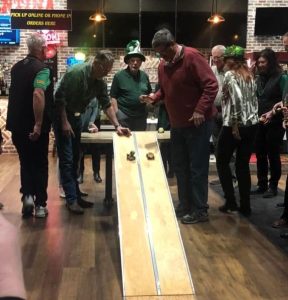 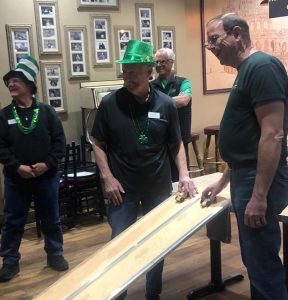 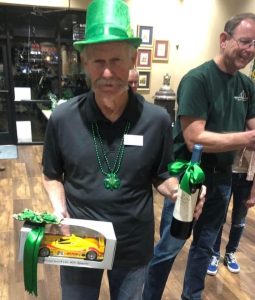 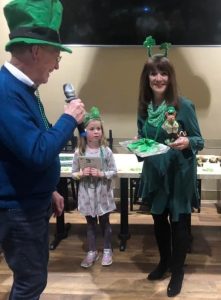 prize Porsche model donated by Bob McLaughlin, a bottle of wine and a St. Patrick’s Day ribbon skillfully crafted by Mary Lou Kugler.  Hal received (2) 6 packs of Irish beer and Laura received an Annalee Leprechaun along with a plate of homemade green shamrock sugar cookies. Sorry Hal, I couldn’t find a picture of you holding your prizes.

The races were followed by the Concours Spud d’ Elegance. The 3 judges closely examined all the potato racers brought forward for the last competition of the evening.  After deliberating for a short period of time the esteemed judges announced the following as winners of the special Concours designations: 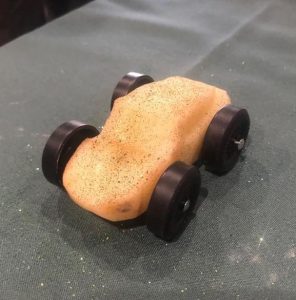 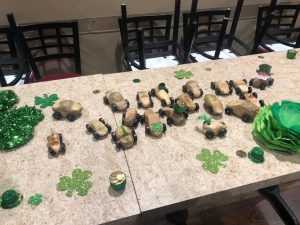 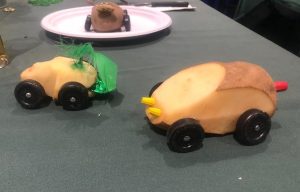 Tom earned the beautiful Porsche car model, another one graciously donated by Bob McLaughlin.  Brenda received the (2) 6 packs of Irish beer, which she exclaimed her husband would enjoy consuming.  Finally, Barry with the car that still looked very much like a potato, went home with the Leprechaun and homemade sugar cookies. 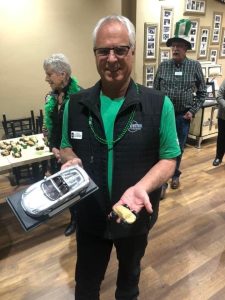 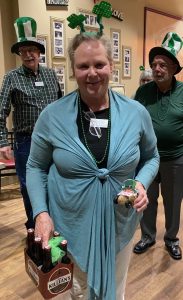 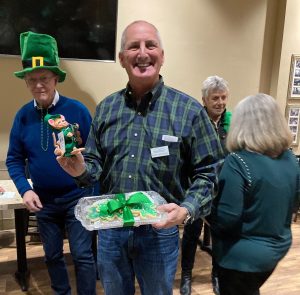 So, for this “new-bee” cub reporter, it truly was a fun-filled evening.  Next year, for our 10th “St. Paddy’s Day Great Potato Race” I’ll be there early to select the perfect tatter, bring my special carving tools and be ready for the run!  Be sure to sign up—you don’t want to miss it!  Signing off until next March 17th—Sarah Smith Orr (Partner and spouse with Bob McLaughlin).