PCA held its Spring Treffen April 3-6 at the Hilton Santa Barbara (formerly the Fess Parker). The Sierra Nevada Region was well represented by Deven and Rene Hickingbotham, Craig and Mary Lou Kugler, Rich and Karen O’Larey, Barry and Linda Rosenthal, Ozzie and Millie Smith, and Jan and Rosemary Snickers. The weather was warm and sunny and the view of the Santa Barbara harbor and pier, with the Santa Cruz and Anacapa Islands in the background, was outstanding. Food and entertainment were super, the tours were fun, and, as always, Treffen was well organized.

Those that took the Getty Villa tour on Thursday or Saturday were gastronomically over-whelmed with the 15-course lunch that concluded the tour at the Greek restaurant ‘Taverna Tony’ in Malibu. Thursday night’s dinner was a Spanish theme, complete with Flamenco dancers, guitars, singers and all the Paella you could eat (yum). Friday morning found the O’Lareys, Smiths, and Snickers getting their exercise by walking both the pier and the Red Tile Tour of Santa Barbara. The walking tour featured several well-preserved adobe buildings, built when California belonged to the Spain. A Wine Tasting & Cheese social was held Friday night in the circular patio area that once was the location of the turntable of the old Southern Pacific train station, where locomotives were replaced with a display of 3 current Porsche models. The closing dinner on Saturday featured drawings for prizes and the announcement of the locations of the 2020 Treffens. Spring Teffen will be at the Broadmoor in Colorado Springs and the Fall Treffen will be at the Greenbrier Resort in West Virginia. The Smiths and Hickingbothams sat together at the closing dinner, where none could imagine that two weeks later Deven would be taken from us (what a loss). 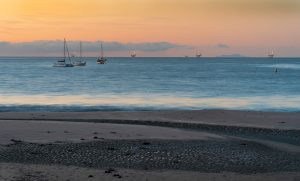 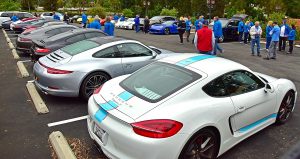