The Sierra Nevada Region was finally able to hold its first driving tour of 2020 on Saturday, June 20. The tour began in Reno, paused in Genoa to pick up more participants, then passed through Woodfords and Markleeville, before heading up over Ebbetts Pass (8730′) and Pacific Grade Summit (8050′) to arrive at beautiful Alpine Lake (7350′). There, the 50 participants enjoyed a 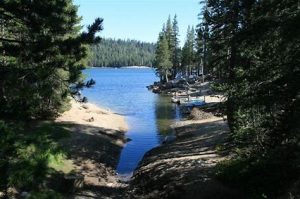 socially-distanced picnic lunch and explored the lake shore. Then it was back over Pacific Grade Summit and Ebbetts Pass and up over Monitor Pass, before arriving at the tour’s last stop at Topaz Lake.  From there the participants headed home on their own. The tour was originally planned for 30, then increased to the Nevada maximum of 50, when the organizers were overwhelmed with the enthusiastic response. Clearly a good part of the club couldn’t wait to get out in the open air and drive their Porsches.

We should note that things didn’t go quite as expected when we got to Alpine Lake. The parking lot was full in the area where we had originally planned to picnic, on this Father’s Day weekend, and we had to explore other areas until we found one with enough parking 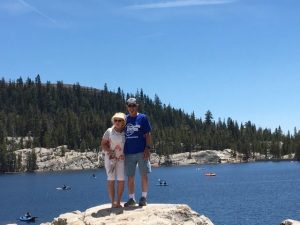 and picnic tables for our group. Unfortunately, the area we landed in offered only one portable restroom, instead of the 4 we promised, resulting in longer lines than planned.  On the plus side, we were steps away from huge boulders jutting out into the lake (that some of us explored) and the weather was perfect with blue skies and 75 degrees.  The Smiths are definitely coming back here to exercise their kayaks.  Our apologies to the 12 individuals on the wait list, we hope to see you on a later tour.