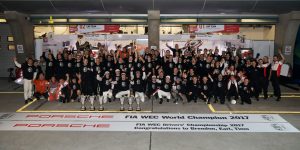 Michael Steiner, Board Member for Research and Development at Porsche AG: “Three manufacturers’ world championship titles and three Le Mans victories for the Porsche 919 Hybrid are confirmation of our initial bold decision to attempt something totally new. Especially in regard to battery technology, downsizing, efficiency improvements with the turbocharged petrol engine and, in particular, for energy recovery systems. We didn’t look for role models, instead we struck out on our own path. Only by doing this could we create such a strong package, which has enabled us to make huge progress on the racetrack and in our technical development centre.”

This link takes you to the timeline with all stages and information on the team’s background:
presse.porsche.de/prod/presse_pag/PressResources.nsf/Content?ReadForm&languageversionid=797811&hl=motorsport-news

First victory in the maiden 2014 season

The career of the innovative Le Mans Prototype, with a system output of a good 900 hp (665 kW), in the top category (LMP1) can be likened to a journey in the fast lane: In 2014, Porsche unveils a unique drive concept. A compact, highly efficient two-litre, V4 turbocharged gasoline engine (500 hp/370 kW) is supplemented by brake and exhaust gas energy recovery systems. At the press of a button, the two energy recovery systems mobilise a boost of an extra 400 hp (294 kW), which gives the 919 a traction advantage under acceleration. While the normally aspirated power unit drives the rear axle, the high-performance electric motor gets to work at the front axle and transforms the Le Mans prototype into an all-wheel drive when exiting corners.

Already in its maiden 2014 season, the Porsche 919 Hybrid pockets two pole positions (Spa-Francorchamps/BE and São Paulo/BR) and its first victory at the six-hour finale (São Paulo/BR).

2015 Superior right down the line

For the 2015 season, Porsche retains the drive system – which is still the most advanced in motor racing today – but turns every component of the 919 inside out. The lessons of the debut season are implemented at a breathtaking development speed. The 919 is the car to beat in 2015: Neither Audi nor Toyota and Nissan as the fourth LMP1 works team manage to even once secure a front row grid position. The two front spots are the sole domain of Porsche. Neel Jani (CH) sets a qualifying record for the current track layout of the Circuit des 24 Heures of Le Mans: 13.629 kilometres in 3:16.887 minutes, averaging 249.2 km/h. The first of three overall Le Mans victories for the 919 follow thanks to Earl Bamber (NZ), Formula 1 driver Nico Hülkenberg (DE) and Nick Tandy (GB). The trio shares the third 919 Hybrid that Porsche fields that year. When it comes to Le Mans and prototypes, they are the least experienced – and yet of all the drivers to bring home the 17th outright victory in Porsche history, it is them. The most recent success had been back in 1998. Porsche – which is inextricably connected to the myth of Le Mans like no other car manufacturer – had not competed at the top echelon since 1999.

The name of the game at the Bahrain finale is to bring home the World Championship for Drivers. Bernhard/Hartley/Webber struggle with an ailing car. Over the course of the race, both throttle barrel levers of the combustion engine break. Quick-thinking mechanics fit two pliers into the red-hot engine and lock the barrels on full throttle. Engineers programme the engine management system in real time. Pit stops still work but only in electric drive. After two pit stops for repairs, the pilots have to settle for fifth place. Only when Marc Lieb (DE) in the second 919 outpaces the leading Audi-driver André Lotterer (DE) shortly after the halfway mark of the race does the title come back within reach. The nail-biting drama has a happy ending: Romain Dumas (FR), Jani and Lieb win the race and Bernhard/Hartley/Webber secure the world championship title. The drama, the driving prowess, and the impressive performance of the still-young team turn the 2015 finale into the highlight of 919 history.

For 2016, the competition returns stronger. Many details of the 919 get a makeover, but not a totally new design. The air becomes thinner. At Le Mans, Bernhard/Hartley/Webber are leading, only to have all hopes dashed when their 919 suffers a water pump failure. From midnight, the 919 shared by Dumas/Jani/Lieb is locked for hours in a distant duel with the fastest Toyota. Porsche’s simulation programme is constantly updated: will work, won’t work. When Jani pulls into the pits with a slow puncture for an unscheduled service several laps before the flag, a Toyota victory looks certain. But with one lap to go, the race takes a shocking turn for Toyota: Kazuki Nakajima (JP) loses power and rolls to a stop. Jani brings home the 18th overall victory for Porsche.

Dumas/Jani/Lieb lead the world championship, however, the season turns gnarly for the Le Mans winners. The rivalry within the team is staunch. Bernhard/Hartley/Webber claim victories at the Nürburgring, in Mexico City, in Austin and Shanghai. In China, Porsche scores its second Manufacturers’ World Championship title. At the finale in Bahrain, sixth place is enough for Dumas/Jani/Lieb to replace their teammates as the world champions. Bahrain is also a stage for farewells: Audi steps down from the WEC, Webber retires from professional motor racing, Dumas and Lieb leave the LMP1 programme.

For the 2017 WEC season, the Porsche 919 Hybrid lines up on the grid with modifications to its aerodynamics and suspension as well as other efficiency improvements for the power train. The driver lineup has been reshuffled: The reigning world champion Jani now shares the No. 1 Porsche with André Lotterer (DE), who has been signed at Porsche after Audi’s withdrawal from the series. Tandy joins them as the third driver. In the sister car, Bamber joins forces with Bernhard/Hartley as a replacement for the retired Webber. For cost reasons, the WEC permits only two aero kits per season. Porsche focuses on Le Mans: the season highlight not only provides maximum prestige, but also awards double the points. The first two races at Silverstone (GB) and Spa (BE) are run under a damage-control strategy due to the aero kit, which is good for top speeds on the high-speed Le Mans circuit, but lacks downforce in the twisty passages. Second and third in England, third and fourth in Belgium. At Le Mans, two Porsche go head-to-head with three Toyota. In the qualifying and in the early stages of the race, Toyota sets the pace. At 6.30pm, the Porsche pit crew is alerted to a problem. In the 58th race lap, Bamber is running in fourth place, but has lost power at the front. The team leaps into action. At 7.35pm, the race is in its 78th lap when Hartley takes up the chase. Running in position 54 and 19 laps down, the situation looks hopeless.

Toyota sustains heavy losses in the night: Two prototypes retire, one has fallen far behind. The fierce fighting takes its toll, and in the morning, shortly after eleven o’clock, Porsche too falls victim: Holding a lead of 13 laps, Lotterer has to throw in the towel with an engine failure in the scorching heat. It’s now the moment of truth for the sister car: Bamber/Bernhard/Hartley plough through the field of the other classes. With 20 laps to the flag, Bernhard sweeps into the overall lead – his dream of winning Le Mans with Porsche is nigh. It’s the third outright victory for the 919 at Le Mans and the 19th for Porsche.

The Le Mans winners also claimed full points from the Nürburgring, in Mexico City and Austin. Bernhard and Hartley become the most successful drivers in WEC history. In Shanghai, after the eighth of nine WEC rounds, the third straight Manufacturer’s World Championship title for Porsche is secure. The Porsche 919 Hybrid has achieved everything.