It’s was a very warm Saturday morning when half of our tour group gathered at the McDonald’s Wedge Parkway location in Reno, with Porsches fueled and ready to go, restless to stretch their legs. Following a drivers briefing we headed out for the Carson City FoodMaxx to join up with tour  participants south of us. After a short meeting we all headed east on NV 50 toward Fallon and the long drive to Eureka and Elko.  We were fortunate to have no less than 3 geologists along on this tour (John Hertel, Richard Yancy and Laura Symes) who have been involved in North Central Nevada mining for decades.

John and Debby Hertel lead the drive out of Carson City and after a brief comfort stop in Fallon we made our first geological stop at Frenchman Flat, about 100 miles from Carson City. 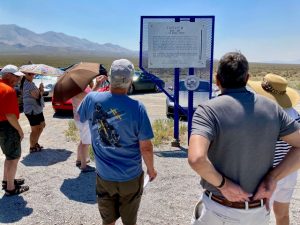 Here John Hertel discussed the mining activity that was done in the area.  It was interesting to note that the town of Frenchman which no longer exists was the stage stop and supply center for the two adjacent mining districts of Fairview and Wonder. Driving by on NV 50 no one would suspect that gold mines in this area, in the early 1900’s, supported a small community in this desolate location.  John recalled fondly his mining days in the area,

stopping after work in Middlegate to enjoy a cold brew (possibly 2) while watching A6 and other Navy aircraft practice bombing runs on the range just West of Fairview Peak. Asked how she stayed busy when John was away Debby remarked this was no problem with 3 little ones in the house. Glad to get back into the shade and air-conditioning of our Porsches, it was 106 degrees, we resumed our drive east on NV 50 and some 70 miles later made our next stop at the gas station in the mining town of Austin. The town folks were welcoming and we enjoyed refreshments on this hot Nevada day. They make one heck of a cheeseburger at the gas station food trailer .

From Austin, we continued east on NV 50 over Austin Summit (a few fun curves and hairpins) toward Eureka and some 40 miles further on made our next geological stop at “Bean Flat.” John talked about the extensive mining that operated around the clock in this area.  Richard Yancey, Elko geologist and club member, commented about watching the lights of haul trucks working multiple shifts to bring out gold ore.  Before leaving Bean Flat everyone posed for a group photo with their cars. 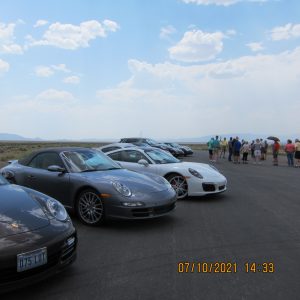 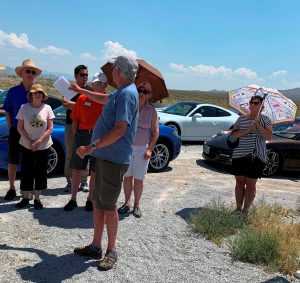 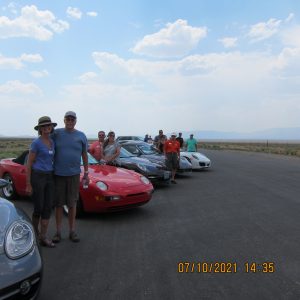 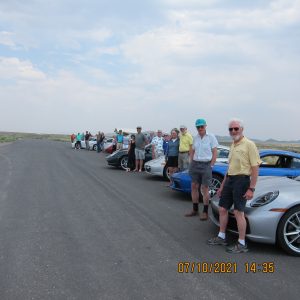 Once back in the comfort of our air-conditioned Porsches we drove another 35 miles to another geological stop just a couple miles short of Eureka, just west of the intersection of NV 50 and NV 278. There we learned about Ruby Hill mining and the extensive amount of gold this area produced.  This mine has generated a huge economic benefit for the Eureka area. No wonder they call it “Eureka!” 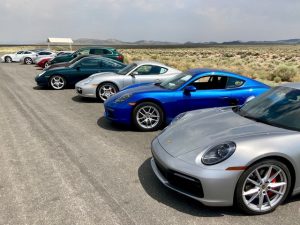 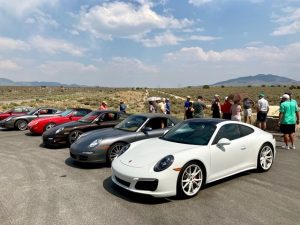 This concluded our geological stops and with evening approaching, John announced that Dick Bottom and his trusty co-pilot Ragner Kuehnert would now take the lead. Following Dick we turned left onto NV 278 from NV 50 and headed North toward Carlin.  A beautiful drive of 90+ miles over a lonely open road with many long sweeping curves through rolling hills and valleys that was just perfect for our cars. Some 30 miles up 278 we encountered a thunder storm and very heavy rainfall, rather typical in the late summer afternoons in these parts. This reduced our pace for a few miles with visibility limited to a hundred yards or less and the possibility of hydroplaning.  All the Porsches made it through the cloud bursts without incident and as we approached Carlin the biggest concern became our remaining fuel range. Although we probably could have rolled into Elko on fumes and paid a lot less for fuel there, most of us took the  conservative approach and stopped at the Chevron station in Carlin. While there the Smiths discovered and removed the remains of a small bird attached to a headlight surround (the Porsches weren’t the only ones flying low), which as it turned out was only their first animal encounter on this tour. Now refueled and with Elko just 25 miles down the road, we head east on NV 80 to Elko and check-in at the Shutter’s Hotel, ready for some relaxation and freshening up before the Star Hotel Basque Dinner. To our surprise, Ron and Denise Lewis had checked in well before us, not needing to refuel their 968 before reaching Elko (the old Tortoise and Hare scenario).

Everyone met promptly at 7:00 pm at a very busy Star Hotel, where 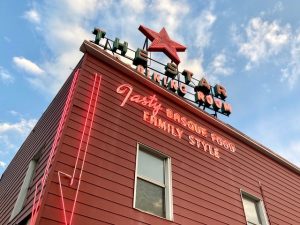 our pre-arranged reservations experienced a substantial delay. The bar did a brisk business as we waited for our dining room to became available, where we enjoyed a chat with Sonny McBride, one of the local regulars. Richard Yancy remarked that this was his third dinner at the Star this month. Seems that everyone in Elko was getting out to dinner now that covid restrictions were lifted. Eventually we were lead to our dinning room and seated and when our entrée orders were completed we settled in for a delicious feast with enjoyable conversation.  No one came away hungry. 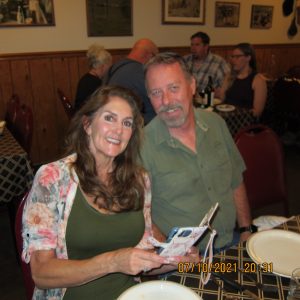 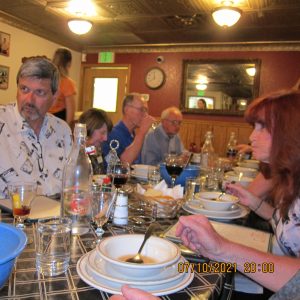 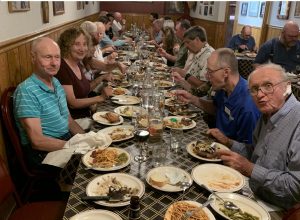 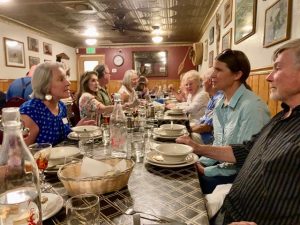 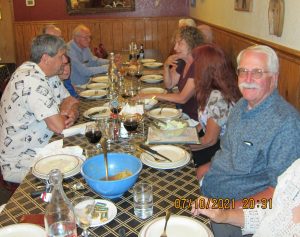 The next morning most people met for breakfast, then bid farewell and went on their separate ways. Some headed straight back toward Reno and home. Others spent a few hours exploring the Elko area before returning home. An adventuresome few drove up to the small town of Lamoille, just on the edge of the Ruby Mountains, and then up Lamoille Canyon for a closer look at these mountains. During their drive up the canyon the Smiths had their second animal encounter, this time with a large deer. Apparently this buck was either deaf or mistook their deer whistle for a mating call. Quite a scare to have the full length of a deer’s back up against your windshield, but fortunately neither the deer nor the Porsche were greatly injured. The buck landed on its side just off the other side of the road and was up and gone in an instance. The haze you see in the pictures below of Lamoille Canyon was due to smoke from a large fire near Prescott Arizona, a few hundred miles south of the Ruby Mountains. 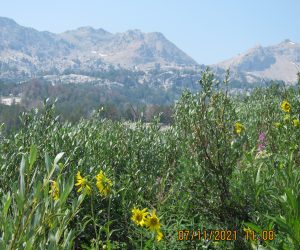 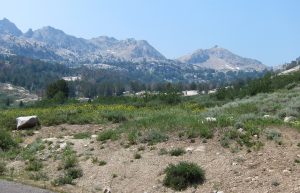 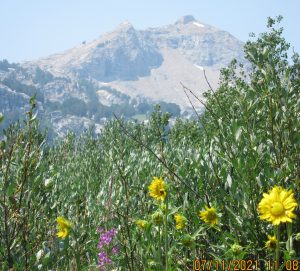 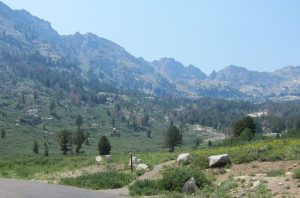 The tour participants all agreed the North Central Nevada Tour was a wonderful, educational drive, although a tad warm. You didn’t care to be out in the mid-day sun for long. Many thanks to Dick Bottom, Ragner Kuehnert and John Hertel for planning and pre-running this tour and to John for his educational talks. If you had wanted to take this tour and  missed it, I’m sure we’ll do it again in a few years. Our Porsches enjoyed a thorough workout, travelling roughly 800 miles roundtrip from their garages.