Bright and early on a July Sunday morning, eight Porsches drove out to Safe Haven Animal Rescue in Imlay, Nevada. After a quick stop in Lovelock we pushed on, happily enjoying the 80 MPH speed limit and arrived at Safe Haven around 11:30AM. Upon entering the Safe Haven office we were greeted by two beautiful parrots and a very friendly desert tortoise. Shortly after hearing about the history of Safe Haven – a facility started in 2000 to take in and care for abused lions, tigers, and other wild animals – we started our tour. First, we visited the African serval cat enclosure and met Roy Rickey and Simba. We then went to the tiger enclosures and saw Lily and Caroline, two beautiful Bengal tigers, and a huge white Siberian tiger named Clarence. Continuing on with the tour we saw Mona the lioness, a white fox named Oreo and then two very large black bears Ben and Teddy. It was a thrill to see so many magnificent animals being well taken care of here in Nevada. After the tour and a rest at their picnic tables we drove on to Lovelock where we had lunch, and then returned home to Reno. 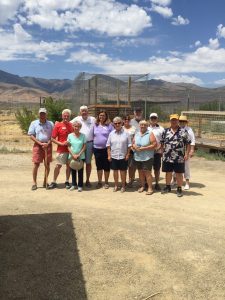