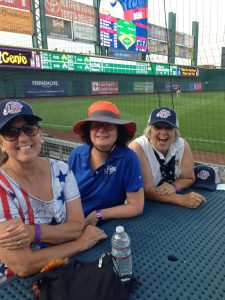 club members met at Nevada Field to watch the Reno Aces battle the Las Vegas Aviators, for best team in Nevada bragging rights. We enjoyed the buffet, drank a couple of beers, watched a ton of offense, and saw a few nifty double plays. The Aces trailed most of the game before rallying to tie it up in the bottom of the 9th. Alas, the Aces lost in extra innings, although they retained their lead in the league standings. Our momentary disappointment at their loss was quickly assuaged by the rousing fireworks show that concluded the evening. As an added bonus, all attending members got an Aces baseball cap to remember the fun. The aforementioned cap is enthusiastically modeled by Denise Lewis and Alice Strom in the picture on the right, shown sited with our hostess for the evening, Rene Zupon Hickingbotham. 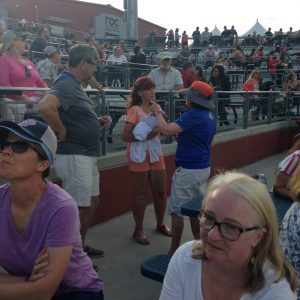 Interesting side note: Scheduling the Aces game and the North Central Nevada Tour on consecutive days prompted Elko club members Richard Yancy and wife Laura Symes to drive to Reno to attend the game, return to Elko with the tour the next day, and join us for a Basque dinner at the Star Hotel Saturday night. The Aces game was the first opportunity we have had to meet Richard and Laura, they don’t get to Reno that often. Perhaps they will join us for a tour next year, rumor has it that we may be heading to Ely, Nevada next summer.

If you missed the Aces game you should be aware that this is an annual event.

We hope to see you at the Aces game next year.